For the last full day before returning home we didn't fancy using the car so we did an approximation of the Hall Walk, a good 5 miles with 2 ferries and lots of exploring in Fowey. 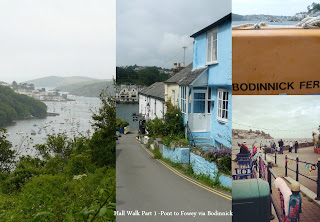 The views on the first part of the walk were pretty good, up above harbours of Boddinick and Fowey. I was also delighted by this blue house, and being on a boat but the greatest surprise was that Fowey harbour had been yarnbombed! The whole harbour looked lovely as we sat and ate our sandwhiches amongst the tourists.

Fowey contains lots of art and interior shops, there was an especially cute shop which sold handmade ceramics and crochet/knitting. I also bought lots of greeting cards from some of the galleries (since we can't afford the real art). We debated getting a large serving bowl the same as in the cottage, and I fell in love with a quilt. We ended up buying neither, dissuaded by being less than half way around the walk. 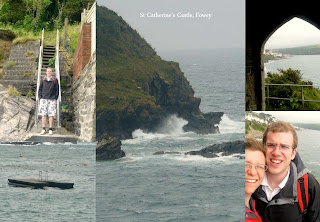 We spied a castle in the distance and walked there via the beach. We didn't have the teapot with us because we were planning on going for afternoon tea, but there were a family on the beach making smores and gosh that was inspiring for the future. It was a lovely looking little beach for swimming (and even had this swimming platform), but the weather was a bit too rough for that day (not the waves and the faces above). The castle itself was mostly ruined but I loved the view back to the town through the window. 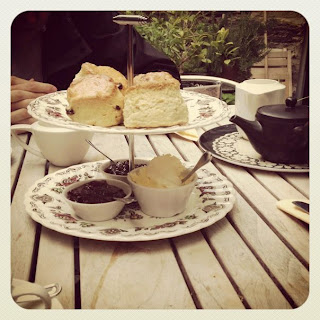 After freezing (poor husband in shorts) and been blown about, we deserved our afternoon tea at The Dwelling House. The 'gourmet' earl grey was actually not very good (they were loose leaf but ground, not anything like the amazing Adagio Teas Earl Grey). The scones were delicious though! My visit to this tearoom, however, was spoiled by the toilet. I have a recurring nightmare about having to urinate infront of people in a wide open bathroom. Well, the toilet was just in a bedroom, with windows and stuff. I would happily go in that bath if it were, say, on a beach in the middle of nowhere. But that was the toilet to use for all the customers, and I felt really uncomfortable about using it. 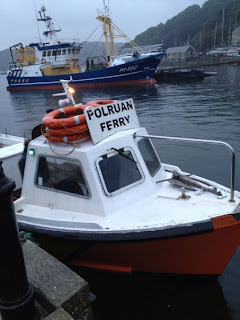 Anyway, after a hasty retreat Mike and I bought some bread and some John Dorey from the fishmongers for dinner, and set off on the walk back. This involved getting the passenger ferry to Polruan (yes, this is really the ferry and not an imposter touting for tourist money as my dad assumed). The walk back along the creek was very muggy, and we got lost twice but it was entertaining to end up in the grounds of an abandoned mansion where the ex-owner happened to appear because he was reminiscing about living there and moaning about foreigners buying holiday homes.

Dinner was very yummy, we were inspired to buy a book of seafood techniques.


On the last day, we went home via Adrenalin Quarry - The UK's longest zipline. I consider myself very brave to have done it after the eden project viewing platform, photos on a ledge, and afforementioned toilet fear fiascos - but it was really great! Not too fast but instead serene. Not quite worth all the money they charge but definitely worth a visit.

Coming home on a Saturday meant that by Sunday evening we were relaxed again, and had finished all the laundry and unpacking. At least, we would have been relaxed if I hadn't somehow hurt my back whilst driving over a speedbump which has taken until Friday to heal!

Let me know if you use any of our holiday ideas when you visit Cornwall, or if you too have an irrational fear of toilets or a perfectly valid fear of high places.