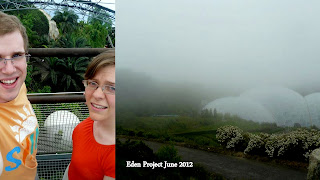 So we decided to go to the Eden project. We didn't really take many photos of the flowers because we wanted the best chance to see everything. We did take this photo of us on the viewing platform, I don't look happy at the height do I? This was my second attempt to get up to the top and, I think, if I hadn't had to wait 35 minutes in a queue I wouldn't have been so determined. The Eden project was great (and we bought tickets cheaply with our clubcard)! We saw (and learned) loads and bought ourselves some hot chocolate to take home (real stuff that you grate into milk).

After the Eden project we drove to Polperro (a harbour near Fowey), potentially to visit The Blue Peter Inn (which has great reviews) for dinner. When we got there, it was busy and the menu wasn't as exciting as we'd hoped so, instead, we drank tea on the beach (alas we'd already eaten the brownies in the queue for the viewing platform at the Eden project) and I saw a one-footed seagull. Polperro is strange because it has a river running through the backs of the houses but the harbour is very pretty, with lots of rocks to explore. 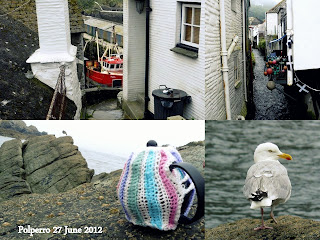 We spotted some steps up from the beach which pointed to a short circular walk with extensive views (2 miles I think). It soon transpired that the fog meant we weren't going to see anything but everytime there was a viewing point we took a photo as we felt commanded. 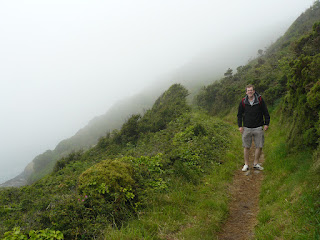 On the way back we tried to be inspired by the various seafood restaurants but the lunch yesterday had spoiled us so we bought some mead and some cider and went back to the cottage for a simple tuna salad.

Day 3 then was a success, despite the weather. We actually enjoy walks in this sort of weather (and the lack of people). Especially when we came across a smugglers tunnel with a ladder which went down through the cliff onto the beach. Mike went to explore it. I did not.