A walk around Charlecote and Wellsborough

This Saturday Mike and I enjoyed a walk around the Warwickshire countryside. We never normally drive to a walk but we were planning on going onto Stratford upon Avon afterwards for some cake and a coffee and a wander. We were also scouting a potential village for house buying.


The walk started from Charlecote house. We didn't go to the actual house so I have no idea how good it is but it looked very grand from the outside!


The maps in this little set are useful, but nowhere near as easy to follow as an ordinance survey so we ended up slightly offtrack. But nevertheless it was a lovely 6 miles of woods, open fields and skies and a bit of river. 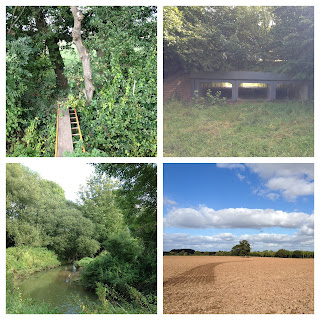 These are some of the photos from the walk. The ladder was supposed to be a bridge! Also, the written directions told us to go underneath the road and so upon seeing this (very low) path we thought we were supposed to crawl through. Turns out there was a proper bridge around the corner.

We also happened upon a fence post that we had to climb over. I stepped on it and the whole thing collapsed! It was actually a tumble-style which I've never seen before (I thought I'd broken a fence).


This time last year we did long walks every weekend. The summer tends to get busy and this one was particularly damp so we're going to try to take advantage of these crisp and dry days to explore until we fill our weekends with looking for houses properly.


Upon getting back to the carpark we decided to go and buy a cup of coffee and a cake from the house since we'd used the car-park. Instead though we (I) got completely sidetracked by the amazing flower and vegetable shop. There were about 45 varieties of squash (pumpkins, courgettes etc) both edible and inedible as well as large bunches of the last of the season's dahlias. The colours in the whole place were amazing.

Mike allowed me to buy 3 different sorts of squash and he also sneaked in a bunch of the Dhalias for me :)

After a 2.5 hour walk and a long time choosing squash, we didn't go on to stratford upon avon and instead returned home. This will be saved for another weekend!